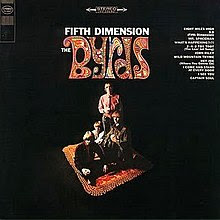 In a way it's interesting that I've never written much about the Byrds here, or anywhere that I've ever put up any kind of music criticism, almost as if I was afraid to try and delve into a body of work that's had such an effect on me. Three Byrds LPs were a staple of my early childhood, an outgrowth of the band's appearance on a compilation tape my brother had. They were Mr. Tambourine Man, Turn! Turn! Turn and Greatest Hits. The latter is the only of the three I listen to very much now. Tambourine Man, despite its many highlights, is too earnest for me, and Turn too much of a dated slog. What moved me about this music was its sound -- it goes so much beyond the mere idea of folk-rockers with 12-string guitar and a sort-of-okay drummer. The voices were a lot of it, the ethereal friendliness but also mystery of them. The collision of baroque Appalachia with turned-on rock & roll was something too.

But the truth is that so much of my adoration of this band -- in some ways more important to me than any other, certainly in their accidental formation of my future tastes -- lies in something more intangible and emotional: the constant hunger for a transcendent moment, the sort of thing that was so often out of reach of conventional white rock bands and is a more admirable goal for them than anything technical. It's all over Greatest Hits, for me the definitive way to hear the Gene Clark-era Byrds. Just listen to that moment on their first and best single, the cover of Dylan's "Mr. Tambourine Man," when Roger McGuinn's interpretation of Bob Dylan's lyric "I promise to go under it" erases any gap between words and meaning; it's audible in him that he means those words to his core. The Byrds are seldom arch or sardonic, but nor are they oblivious and sober -- their essence is the matching of their genuine maturity with a thirst for the new. For me, as much as Gene Clark's work is for many the essence of the Byrds, the band's true nature comes to its peak on the four incredible albums that follow his departure, starting with this one.

Clark was of course a brilliant songwriter, and a strong case could be made that he's a far better one than Roger McGuinn -- and virtually no one disputes that David Crosby is not the best personality to be positioned at the Byrds' front lines. Fifth Dimension is really a stopgap, a fine band looking for their footing after a crippling loss, but in its strange search for an identity it happens upon a sound that remains nearly unique. For all their sure-handed experimentation, the Beatles weren't so bold as to attempt to make Rubber Soul and Revolver the same record.

There are aspects of Fifth that still seem desperate: the band's version of the rock standard "Hey Joe" is one of the weakest on record, the awful Booker T.-like instrumental "Captain Soul" reminds us of the limitations of the folk-rock universe, and the closing kiss-off "2-4-2 Fox Trot," a sound FX-laden repetitive nothing, would barely be sufficient to justify a b-side placement. (I admit I thought it was an extremely cool song when I was younger and attracted to anything "weird." The Royal Guardsmen's "Airplane Song" and Tom Tom Club's "Booming and Zooming" will suffice now.) But more generally, the record's conflation of folksy melodicism and genuinely oddball, almost jazz-like tonal experimentation make it in retrospect a brilliant document of a strange moment. Much as the Byrds conceived folk-rock itself out of wholecloth, with hangers-on like the Cyrkle to gingerly follow, here they recorded some of the earliest music that justifies the "psychedelic" label.

A lot of psychedelia, like a lot of folk-rock, would prove gimmicky and pandering. Fifth Dimension presents us with noises and asides, and moments of unexpectedly shattering beauty, that are truly new and that still resonate with the sense of something being created. One of the most impressive songs from this period still boasted Clark's contributions and was left off the record; the brilliant, barbed, bizarre "Why" showed up as the b-side to "Eight Miles High," forming one of the few '60s singles that can compete with the Beatles' "Penny Lane" / "Strawberry Fields Forever" twofer as the most vital double-sided 45 ever pressed. A lot of folks claim, and they may be partially right, that everything Fifth Dimension accomplishes can be pared down to these two songs. Certainly "Eight Miles High," primarily a Gene Clark song but launched into the stratosphere by McGuinn's guitar, is among the boldest and most adventurous songs ever labeled rock & roll, a ringing parade of tricky and unexpected guitar acrobatics matched beautifully with sinister, alluring harmonies and an exhilaratingly seductive crescendo. It's unwaveringly scary and beautiful in equal measure and deserves its pedestal wholly.

But discount the accompanying album and you miss several songs that may not synthesize the Byrds' new approach so economically but certainly present additional layers and angles from which to consider it. At a glance, "5D (Fifth Dimension)" is stoner claptrap, a bunch of poetic scientific babble (actually a paring down of Einstein) speak-sung by McGuinn in his "The Bells of Rhymney" voice, but as the song progresses and he lets out an unprompted "ohhhh" and the band's harmonies -- darker, stranger than before -- kick in, the evolution is obvious and their naivete becomes an object of affection rather than ire. The old Byrds are still evidenced on the traditional-ish number "I Come and Stand at Every Door," eerie but gorgeous, and the standards "Wild Mountain Thyme" and "John Riley." The change is not just in the tasteful string arrangements from new producer Allan Stanton, worlds beyond any meddling attempted by Terry Melcher. The voices -- with Clark now replaced by Chris Hillman -- are more halting, emotional, thus in some sense more appropriate to the material than the confidence and detachment all over Turn! Turn! Turn!.

The moments on Fifth Dimension that feel truly new are those that carry forward from the strong raga and Coltrane influences of the leadoff single. The "Eight Miles High" sequel is "I See You," a fine rock number that sees further bracing guitar experimentation from McGuinn at the peak of his inventive powers, but even David Crosby's "What's Happening!?!?!" is a distinctive creation, sounding for all the world like an Ravi Shankar-infected sitar adventure without actually featuring even a second of real sitar playing. As on "Why," that's all McGuinn's 12-string you're hearing. Less of a stretch for the band but ironically pointing the way forward is "Mr. Spaceman," a remarkably witty country-ish take on UFO abduction that gives McGuinn an opportunity to show off with a splendidly warm vocal and melody -- in my head now since the age of four, roughly -- and one of the best, most concise guitar solos on any rock record ever.

But inevitably, "Eight Miles High" stands above all. The Byrds had been listening to Coltrane a lot, according to legend, and also to the Zombies, who'd managed to include improvisational jazz interludes on several big songs (and would continue to up to their breakup). So for this record, McGuinn uses his 12-string to initiate a ragged and stunningly lyrical imitation of the saxophone of the twentieth century's single most gifted musician. In the process he single-handedly creates a new sound, and it goes beyond psychedelia. This was 1966, before the Velvet Underground, before Forever Changes, certainly before bands like Television who would so emphatically capture the yearning emotional force of jazz in Tom Verlaine's guitar playing, in a sense whose roots are unmistakably audible in "Eight Miles High." In so many ways, this feels like a new beginning: the start of the real California Sixties, as we remember them, and of everything that would grow outward, ready to mutate and grow. It starts with someone pulling a stunt that doesn't sound quite right at first but that feels profoundly, fascinatingly, ear-tinglingly wonderful. There is no more noble pursuit for rock & roll.
Posted by dustybooks at 10:08 AM No comments: