First of all, don't even ask the reason for this, of the four volumes in this collection I've discovered I seem to own numbers two and three only, perhaps because they were all I could find about ten years ago when I looked. Could've set out to correct that, but in trying to learn about Arthur "Big Boy" Crudup, the second volume of this exhaustive Complete Recordings series is the one to jump to immediately, as it includes one of those shot-heard-round-the-world sides so rare in rock & roll and blues alike, "That's All Right." Of course, as you know, it was made an important record not by its own composer and performer, Crudup, but by one Elvis Presley a decade later.

Presley was always a champion of Crudup and had a world opened up by his records, which has turned out to be arguably his major claim to fame -- though "That's All Right" is hardly the only song he wrote to become a blues standard, it's certainly the one that rings loudest outside of circles familiar with the American blues of the '40s. Crudup never returned Presley's affection and mostly was bemused by the extra exposure, which couldn't and didn't translate into money and personal success for those cursed by the royalties system in those days.

To one who is not Presley, even one who is a bit of a budding aficionado for this music, Crudup can initially seem an indistinct performer in the Delta blues universe. Listening to this compilation front to back one is struck by the sheer sense of repetition; every song he recorded on the day in the late summer of 1946 that produced "That's All Right" has the same melody, as do many of those presented from later sessions (stretching over the following three years). Beyond his limits as a composer -- his moments of inspiration are scattered -- Crudup isn't much to listen to as a guitarist. It can seem that his influence outpaces his passion and accessibility.

But with further exposure, Crudup's sides begin to sing a bit -- quite literally. His great strength (besides consistently solid lyrics) is his voice, which is imbued with constant passion and enthusiasm that sets him apart. Scholars have wondered for over half a century now what it was about Crudup that so affected Presley, but the answer may be here: the way that even when his songs lapse into laziness or apathy, Crudup still swings and gallops and growls with such verve, presence, sensuality. The more one listens to the disc, the more he becomes a pleasure to hear. The chronological arrangement is perhaps the sole reason it's initially a tough sell; start instead with "That's All Right," which you know, "Hoodoo Lady Blues" and "Lonesome World to Me" and you will be reeled in faster.

That said, the very first song included here, "Crudup's After Hours," feels even more like a rock & roll powerhouse than the more famous selections to follow -- bopping and urgent and even fierce, it moves beyond acoustic blues and indicates a depth of talent that deserves further-spread recognition. Crudup is so different from his peers like Muddy Waters, Elmore James and John Lee Hooker and yet bursts forth with a sense of quiet, calm innovation. This isn't a great introduction to Delta blues, but it is an essential document -- and eventually, a pleasurable and pure experience -- in large part because Crudup and his two sidemen, Judge Riley and bassist Ransom Knowling, have such chemistry. Knowling's connection with Crudup is particularly audible in the latter's shouts of encouragement. They feel like a real band, Riley's drumbeat as vital as Crudup's stabs and strums, and they help make this a relaxed, surprisingly cohesive listen but also one that burns quite hot once you give it the time.
Posted by dustybooks at 8:49 PM No comments: 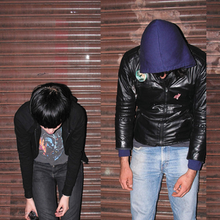 Why is this collection of itchy earworms -- really a sort of Never Mind the Bollocks in its haphazard arrangement of by-now-familiar singles that'd gained cult popularity in the prior year or two -- so damned satisfying? Partially it's just personal taste, for while there's considerable variance to be found here, it's mostly just drawn out in categories: roughly a third pure atmosphere and beats ("Magic Spells," "1991," "Reckless," "Black Panther"), a third deliberate obnoxiousness ("Alice Practice," "Xxzxcuzx Me," "Knights," "Through the Hosiery"), a third things that are almost songs, or even songs. Hate the sound of bloodcurdling Alice Glass screaming distorted over what sounds like someone dying a terrible death in a game of Berzerk for Atari 2600 and there isn't much chance that this maverick duo's interpretation of abrasively pretty EDM, darkened and curious even at its most inviting, will warm you up much.

Perhaps that's really the point. Crystal Castles, at least early on, made now-familiar avant and pop forms seem dangerous again. When hearing the immediate signature "Alice Practice," its clone "Love and Caring" and the bubbly "Knights," there's this magical sense that you're exposing yourself to something that's bad for you. Glass sounds demented, she sounds bloody and vile, she sounds like an uncontrolled unpredictable being, and the music she and Ethan Kath create has an unresolved, maddeningly uneven nature that's both troubling and sexually provocative. For some listeners, all the screaming in the world can't make it unpleasant. For others, no amount of immediately pleasurable dance music can puncture the sense of theatrical, Gothic rock-star agony. In other words, you might think it's bullshit, and the rest of us will think you're just scared of it but really you're just over it. And that's okay.

It doesn't help that Crystal Castles, the first of so-far-three albums of the same name, is too concerned with the experience of listening to function as a real dance record -- it interrupts itself too much, even on delights like "Untrust Us," the absolutely perfect "Crimewave," and the Kath-led "Vanished." That restlessness is the strongest sense we get of Crystal Castles as a band rather than a studio entity. "Crimewave" is certainly a carefully written and produced piece of work, impossibly catchy yet vague, repetitive but absorbing, and its greatest fascination lies in how it sets up cute keyboard trills, turns them upside down and examines them until they grow foreboding. Evil even when it's pretty, this record's still bad for you! All the unpredictable androgyny, the '80s fantasy porn ("Reckless"), the cold starkness and urgency ("Black Panther"). This is not the bliss of a night out -- it's the paranoia.

Allow as they might for drugginess, though, Glass and Kath can be warm and pleasurable; the wall of vocals on "Air War" breaks down into a strange "Computer Blue" synth-glow, the cheerleading "Courtship Dating" is almost a Yeah Yeah Yeahs chorus, and "Vanished" is no more than three steps away from being the most sinister Jock Jam ever recorded. The two of them thrill to all this unease -- they like that you don't predict they'll close on a Cocteau Twins slowdance or sample, of all things, Drinking Electricity and make it sound like "The Loco Motion." They get a kick out of being divisive and spewing something in the faces of everybody that some will love, that some will hold in contempt. It's a little frightening, or it wants to be, but there's also joy and sensuality in it -- and sometimes this particular scary is where you want a sickeningly late night to be headed.