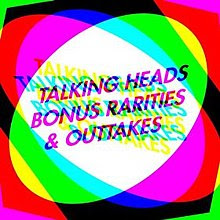 This 2006 digital-only package was designed to supplement the Heads' Brick boxed set, a package containing all eight of the band's studio albums, remastered in DVD Audio format with surround sound and all that. The time constraints of the advanced format led to a pruning of many potential bonus tracks. Unreleased Talking Heads material has always been difficult to come by -- they only had one non-LP b-side -- and the skimpy offerings on the band's two retrospective boxes didn't help matters.

That changed with this atypically minimalistic, clumsily titled package, released with little to no fanfare onto iTunes. It accidentally reveals the reason behind the carrot-dangling of the past: much of the Heads' remaining unreleased material is either inconsequential or deathly dull. The modest, amateurish cover art and no-nonsense bluntness are actually a fair indicator of the slapdash quality of the material herein. The unquestionable highlights ("I Want to Live" and "A Clean Break") have been officially on the market for years, and much of the disc is occupied by material found on the old Sand in the Vaseline two-disc, I guess in some half-hearted attempt to standardize the discography.

As a Heads diehard, I only find myself coming back to three tracks that weren't already in circulation: a slow-burn tackling of "Artists Only," a lengthy alternate mix of "Crosseyed and Painless" that slightly compensates for the absence of an unedited version of the song available on disc, and -- best of all by far -- an arresting, sickly danceable "Moog march" version of "The Lady Don't Mind," wildly brash synthpop unrecognizable from its Little Creatures incarnation, that goes a long way toward filling the stylistic gap between Speaking in Tongues and Creatures. That last cut is essential for all Heads followers; nothing else new here even approaches it.

In the end, I have to applaud the quiet way in which these songs were issued, but they still frankly would work better as bonus tracks on their corresponding albums. Nobody really needs to hear David Byrne doodling on a Nancy Sinatra cover for a few seconds in this sort of context. The Heads reissue campaign was rather botched to begin with, thanks to the unreliable media and mediocre sound quality of the remasters; this isn't the silver lining you might wish for. But don't skip the Moog march, man.
Posted by dustybooks at 6:25 PM