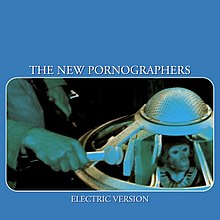 This week Ric Ocasek died, so the Cars have been on my mind lately; they were such a curious, genuinely odd entity, and yet their appeal -- which stretched far beyond that of any other new wave band -- was so obvious you'd have to be a dunce not to get it. They were the noise of eternal youth with a barbed, detached sense of anti-nostalgia, which went in hand with an unmistakable empathy for the adolescent heart that an outsider could misunderstand as snottiness. (You could hear the roots of this on Big Star's Radio City: "I know what you lack, and I can't go back to that now.") Right in the middle of the Cars' career, they released an album called Panorama which was no less hook-driven, hedonistic and teenage than the others but dialed up on paranoia to such an extent that it sounded chilly and dead-eyed, and the consequence was a truly remarkable album that didn't sell as briskly as those prior: you got the impression that the Cars and Ocasek in particular were robots doomed to project a simulation of pop ecstasy for eternity even as the passage of time and some sort of unspeakable doom loomed over them. They became, essentially, broken machines, and although they reverted to skating-rink yearning that more precisely imitated their early hits on their next two albums (which are nevertheless fine), that element of the bizarre made them far more interesting than the crowd-pleasing pop-rock unit that's typically remembered.

A.C. Newman was born a broken robot; it doesn't seem as if he decided to be one. All of his solo work and much of his songwriting in general sounds like an old IBM machine was given the sum total of pop songcraft from 1955 to present and spat out a series of punchcards in response; there is no evidence that this is anything but the way he naturally thinks. And whereas the Cars' legendarily stilted, lifeless live performances (was it deliberate?) seemed like a four-person engineering of Ocasek's dark impulses that came about their popularity almost incidentally because his fetishes were so often ours, Newman's band the New Pornographers enact, on record and on stage, a war against the coldness of something like Panorama at the same time as they celebrate the same kind of infallible cleverness and steely precision that wrought it. On their second album Electric Version, however, they come closest to committing to the same kind of concept the Cars did on their third; in some ways it is a stark record, Newman's soul laid bare not as an exorcism but as an exercise, and I specifically brought up Panorama because I want to emphasize that in this case, that isn't a criticism.

If you listen to Newman's solo records, you get the real idea of where his impulses naturally take him, and even though he is the chief arbiter of what happens on Pornographers albums (though Dan Bejar contributes three of his poppiest ever songs to this one), his records serve as the control group for what happens when he brings even the mere voices and instruments, but also the hearts and minds, of his bandmates into the room. On the previous album's "Mass Romantic" and "The Slow Descent into Alcoholism" among others, Neko Case, Kurt Dahle and John Collins overwhelmed Newman's arch, wiry songwriting by sheer will and manpower; it is difficult to imagine those songs before they were made to tower. On the next one, "Sing Me Spanish Techno" and "The Bleeding Heart Show" marked the point when Newman signalled defeat at last, with his own chords and melodies leaving plentiful space for the swooning of Case et al. like a barista. But Electric Version is the point at which Newman's writing is most unchecked, the subversion most subdued, the sound most uniform, the band's corruption of the songs more obviously than ever an external force. That makes its drama subtler, but it also makes the recordings almost deliriously strange and lively: feverishly thrilling pop music you can't help noticing is deeply conflicted and weird.

A writer once compared the Cars' 1985 greatest hits album to riding too long on a roller-coaster. For neither the first nor the last time, Newman intentionally courts that feeling here with Bejar's help. The core belief being expressed here is strictly an insular (and musical) one, that one can generate blissful, driven, direct music whether one should or not, whether one has "something to say" or is willing to say anything or not. The title cut -- albums one through three all open with one -- is surf-rock alternapalooza, with a wild active beach sound and a chorus of harsh, compressed voices, all elements destined to be revised and reversed and reversed again for the next three quarters of an hour. The production is credited to the whole band, but someone, presumably Newman, orchestrates the band to swirl in moderation around the compositions. You can still hear them reaching out of the void, you can still sense a longing and the usual stirring unison, but the human element is buried underneath a strict adherence to song, melody, hook, and to even such material concerns as airwave, speaker, room. Making music that's about nothing more than the act of listening to itself sounds silly and radical until you consider that it's the most participation-friendly conceit available to you in this context.

The specific articulation of all that comes in the album's biggest classic "From Blown Speakers," which starts out by deceptively slowing the pace before swimming right into pop-manic mode. Newman gets to enjoy all of the formal climaxes here, joined only sparingly by backup vocals from (at least) Dahle and Case. It's on "The Laws Have Changed," amidst Newman's affected, hypnotized singing and plugging away at the pump organ, that Neko Case has a moment at last to appear from the great unknown. And she dutifully leans forward to articulate one of the band's thesis statements in "All for Swinging You Around," the kind of song with a million hooks in its first line alone, yet Case's vocal is almost exclusively responsible for the song's sense of exuberance as opposed to mere sardonic flaunting of record-collector chops. What makes is different from her bigger showpieces to come is that Newman is so strict about limiting her presence; for all his obvious focus upon listener thrills, he's also pretty obsessive about the punk conceit that less is more, never more than on this record. What's more, he seems to be intrigued by the idea, accidentally promoted by everyone from Paul McCartney to the Elephant 6 collective, of songs so infectious that they become annoying, and teeters playfully on that line throughout the record (crossing it many times on his solo work).

The mania returns with "The End of Medicine" (an older song that bursts in and fades abruptly, as though it doesn't belong but couldn't resist) and "Loose Translation," which hark back as much as "Electric Version" to '60s niches, though "Translation" leans closer to glam rock with its vocal filter and massive drum sound. And Newman specifically offers a microcosm of this whole madly paced thrill ride with the strangely neglected "The New Face of Zero and One," which slows down slightly then lifts to the heavens again and generally leaves no doubt that an unseen hand is in control of your feelings here. After all, why are you feeling anything -- which you are -- about such an obtuse sentiment? There's tension there, specifically in what Newman is avoiding, the things he is refusing to say and would keep refusing to say, at least verbally, for four more years and on and off thereafter.

All three of "secret member" Dan Bejar's songs are good, but two are particularly telling and seem to have been designed more adroitly than ever to fit well with Newman's own equally eccentric sensibility. Bejar's tracks tend normally to stand out in one way or another -- "Jackie" unmistakably a different performer's work, "Myriad Harbor" unmistakably more imaginative than the lion's share of what Newman was writing around the same time, "If You Can't See My Mirrors" unmistakably a Destroyer throwaway, etc. -- but he blends into the walls like magic here. "Chump Change" is kind of haunting with its overdriven "hoo-hoos" and is one of the most joyous, triumphant songs he's ever written (with very Bejar bon mots like "flew into a lesbian rage" tossed off as afterthoughts, maybe because as always his lyrical ideas are more distinctive and compelling than Newman's). However, "Testament to Youth in Verse" could be his best contribution to the first three albums by the band; like Newman, he is completely on his own tip here, surrounded by bells, but the band operates at his pleasure and is consumed by his song. It's as much a signature of their classic sound as "From Blown Speakers."

Electric Version gets slightly more reflective on the back end, but only by a hair; like all of the New Pornographers' albums except the much later Brill Bruisers, it's probably too lengthy by a song or two, with a half-hour generally the ideal length of this kind of power pop-derived exercise. With so much talk about composition -- and don't blame me, the band actively courts that -- we've said too little about Newman's guitar playing, which is harder and more furious here than anywhere else in their discography, occasionally courting Bob Stinson varieties of filth and speed in carefully sectioned-off moments, and in fact despite the well-designed compression, a close listen reveals this to be the hardest rocking album in this particular catalog, but like every other element from the sweetness of Case's vocals to the briefly celebratory choruses, it is all processed into the glorious, immaculately controlled morass. There is a reactionary air about the New Pornographers' output taken as a whole and especially here -- fully accepting of neither the uncoolness of pop tunecrafting or the inherent joy of singing and playing good songs together, defiantly confused about their confusion -- that lends them the necessary tension and contradiction to be a great and singular band. You can criticize this album even as you enjoy every moment, but it's important to remember that the heartfelt peaks of Twin Cinema and the better parts of Challengers are exciting and impressive in large part because of the breaking of the mold that's set up here and (to a lesser extent) on Mass Romantic, in the same way that "Bye Bye Love" means so much less without "I'm in Touch with Your World."
Posted by dustybooks at 10:03 AM