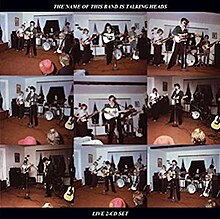 This extraordinary, crucial document of one of the best live bands in rock & roll history is a comprehensive ballooning of an already generous vinyl release from 1981. As brilliant as Talking Heads' studio albums were, the grit and energy of their live performances is beyond anything that could be duplicated offstage. Few bands had such teasing, sensual interplay even from the beginning, and as the lineup and sound broadened, this collection shows that their work only grew more exuberant. It's not that they lose focus and precision, it's that their world gets bigger.

The unique approach on both vinyl and CD versions gives The Name of This Band Is Talking Heads -- so named because of David Byrne's deadpan song introductions; the record starts with him declaring "The name of this song is 'New Feeling'... and that's what it's about" -- the sense of a story being told. The band applied such ambitions to the majority of even their more obligatory work; the film Stop Making Sense was a concert movie with a subtle story arc, the music video collection Storytelling Giant strings the work together in an oblique, artful way hardly befitting the PR slant of such an exercise, and the two-disc best-of Sand in the Vaseline is filled with puzzling asides and jokes. And here: rather than a capturing of a performance in a single era of this dynamic band's career, it's divided in half between their punk years and the point when their output was increasingly infused with R&B, soul and African influences.

The first disc covers the band in the '70s, from the new-wave CBGB's days through their evolution to a more muscular, virtuosic live act, mixing a clever restraint with an unheard-of connection to their audience. Yeah, they are weird... but you're with them all the way, and for all the tongue-in-cheek (mostly?) conservatism of Byrne's early lyrics, their irony is an act of subversion, and their rhythmic intensity and endlessly surprising eclecticism are already in place. To hear the band dissect and distort "Air" and "Heaven" is the kind of pleasure for which you never dared hope, with several cuts topping their studio variants (particularly "Mind"), but the unforgettable moments are that stunning, brooding "Stay Hungry," exposing all of the song's repressed sexuality, and an enormously moving "Big Country," a song I wouldn't have expected to make a good transition to the stage... but this manages to top Eno's cut, already one of the greatest songs in rock music, not least because Byrne almost sounds angry and Chris Frantz fills both ears and heart by taking a disarmingly poignant song in an even more striking direction. Byrne's voice is in fact a major asset here generally, cracking and stumbling through the familiar songs to reveal in them a new humanity and fragile sensitivity, making even the rearranged "Animals" and "Psycho Killer" somewhat melancholy, single-handedly bringing out new worlds in the songs. It may be the best vocal work he has on record.

The first disc of Rhino's reissue is likely the most durable of the pair because it is driven so much by individual songs, but the second is a magnificent album in itself, reproducing the entire setlist from the 1980-81 Remain in Light tour, rife with soaring guitar lines from Adrian Belew and uproariously grand performances from everybody. The very idea of stretching "Born Under Punches" to eight minutes and bringing "Houses in Motion" to explosive life is exhilirating even just in theory, but to hear them is to be stunned. The band is looser than on the subsequent Stop Making Sense, which documented their next and final world tour in 1983, delving into the kind of jams and tangents that led to the composition of these songs in the first place.

They were never more expansive or impressive live than in this period, and Rhino's uninterrupted document is as close as any of us will ever get to being there. It's not an exaggeration to compare it to, say, a Miles Davis album from the early '70s -- this is provocative, demanding, cerebral music, but it's also body music, and it stands in surprisingly sharp contrast to the cheeky novelties of disc one, where "Love -> Building on Fire" might evoke Television but remains a joyous piece of innocence and purity. On the Remain in Light-era tracks, even the older punk-period songs suddenly seem like dark, ambitious delvings into a widescreen dark night. Not only were they never stronger, they were never more serious.

Talking Heads seem to become more popular all the time, but it's hard to say whether this album -- which went unissued on CD for two decades, inexplicably -- has properly been canonized in the manner it deserves. Not even counting the thrill of hearing these songs taken from new angles, it gives the listener who's gobbled up the band's eight albums the feeling of having stumbled upon a whole new set of tunes or maybe a whole new band; virtually none of the selections duplicate or more than superficially resemble their studio counterparts. Not one cut here isn't impressive. (Why the fuck didn't "A Clean Break" make it to one of the Eno albums, anyway!?) This is a definitive document of a remarkable band in their prime. The only problem is it will only make you want to hear more. Luckily, there are some immensely rewarding bootlegs, but that's another story for another day.

[Includes material from a review posted in 2004.]
Posted by dustybooks at 3:00 PM No comments: