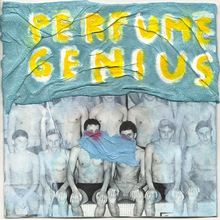 Mike Hadreas' song "Hood" is, no words minced, a masterpiece. Released as the single from his second album as Perfume Genius, it sparkles out clearly as a raw moment of entirely unguarded expression -- from its bare-minimum, haunted "you'd never call me baby if you knew the truth" hook to the unfiltered catharsis of its piano explosion, the thing is an act of emotional terrorism. In exactly two minutes it moves, crushes, and challenges, a seemingly one-on-one communique on which we're invited to listen in. You wish it wouldn't end so quickly, and yet it's perfect that it does, and invites the kind of repeated-listening obsession you can't believe you're subjecting yourself to.

The side effect of "Hood" is it makes everything else on this entirely pleasant and often touching record sound slightly drab, purely a consequence of its everything-falling-together-in-proportion perfection. If you enjoy the key track, there's little doubt that you'll find some things to appreciate on the LP despite the far-outlying nature of its peak. The stark, stunning intimacy appears throughout the record, with excellent use of minimalist sounds like the terminally sad plinking piano on "AWOL Marine," the subdued string arrangement on the dramatic "17," the intricate and whispery dreampop of "Floating Spit."

But despite the command Hadreas exhibits in his best moments -- he knows his way around a classicist piano ballad for sure, as "Hood" and "Take Me Home" prove most immediately -- many of the peripheral songs here have a tendency to sort of float away unnoticed, and paying extra-careful attention doesn't seem to help much. A chunk of the tunes just aren't quite "there" yet, but of course when they connect, they soar. The second best cut is likely "Dark Parts," which brings in some faint pop propulsion but succeeds greatly on the basis of its aching lyric ("I will take the dark part of your heart into my heart," a flooring, deep-rooted sentiment that becomes all the more so when you discover he wrote the song for his mother), but the complex subtlety of the melody on the busy "Floating Spit" points a bright way forward as well. It's easy to guess that this is only the beginning, and Hadreas will be gradually developing into the capable and assured artist he already sometimes hints at being.

Hadreas' voice -- sometimes passing from "lovely" into "moony" -- will remind many of Sufjan Stevens, something amplified by their similar tastes for an almost painful-to-us vulnerability and a regular surrender to pure prettiness that Hadreas seems to be working actually a bit too hard to temper. ("All Waters" is a dirge, "Put Your Back N 2 It" is not nearly so exciting as its title implies, and if you're anything like me you spend "Sister Song" wishing he'd break into a spirited rendition of the Magnetic Fields' "Drive On, Driver.") What makes the record a bit of a task to listen to is not his musical tastes but the sometimes harrowing suggestion of a complex and tortured history -- put in your time and it rewards you, but in the dramatic funeral wheeze baroque "No Tear," the wounds are plain and deep. The record's like a hymnal for perceived sin, lush but subversive, brief (32:13) and confessional. Caught in the right mindset, it's also downright heavenly.