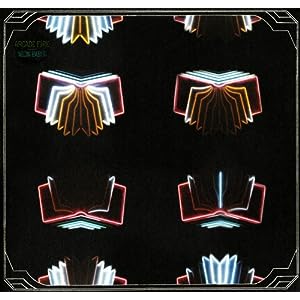 This band had a lot to answer for in 2007; with Funeral, in an age some years after "alternative rock" had ceased to commercially matter, really after any kind of rock band could lay serious claim to belonging to any kind of larger culture, they'd formed some sort of post-consensus consensus -- the closest thing, Coldplay aside, we're going to get to old-fashioned rock stars, except on a tiny label and with an audience of self-conscious college students. The leveling effect of Funeral still can't be overstated, but Funeral was a special record. Where does a lot of hope and a lot of pain lead after that kind of bombastic expression?

Like an odd number of other groups of their period, they answered by holing themselves in a church to put together a sophomore album as Merge Records waited anxiously in the wings, given for the first time an opportunity to follow up a bona fide triumphant seller (the Magnetic Fields had signed to WB after 69 Love Songs, and we all know the fable of Neutral Milk Hotel). Early leak "Black Mirror" is misleading about Neon Bible's response to such expectations -- its slow build, eccentric but vital, is a direct remark upon success and a rockist contrast to Funeral, so much explicit hubris to challenge the more deliberate seductions of yore. It's cathartic but lumbering, oversized. In some sense, the title track is just as deceptive, a minimalist lullaby that turns out to be the sole touch of the non-jugular elements of Funeral, which incidentally are those moments that lent that touchstone its grace, structure and muscle.

Luckily, Neon Bible operates over and above these confusions and contradictions, largely by openly embracing them -- one track, "Black Waves / Bad Vibrations," opens with a lovely blast of Blondie new wave courtesy Regine Chassagne before landing with a thud for the darker second half, as if neither song moved them enough to finish and for some reason they got a kick out of that. We're in probably the fifth generation now of album-driven rock bands and Win Butler and his army of family and friends know the tricks, the secrets of the trade as passed upon the masses by VH1 and Rolling Stone. The second album fucks you up. So they approach it with a supreme confidence and don't bother trying to make it fall seriously together, crafting instead what amounts to a series of very strong pop songs with a certain decisive and furious underscore.

That underscore is illustrated by something far outside the mere scope of a rock album: the personal becoming political. The way Leonard Cohen's "Anthem," from 1992, could suddenly get applause in 2006 for the line "I can't run no more with that lawless crowd / While the killers in high places say their prayers out loud." Compare "Working for the church while your family dies" and "Singing 'hallelujah' with the fear in your heart." Those lines come from "Intervention," the point at which, four songs in to their second album, Arcade Fire transcend everything that's come before with one of their simplest but most massive, assaultive creations -- an onslaught of church organ and a feeling of absolute release of a decade's worth of anger at religion, America, the war. You can't hear it because of the hugeness of the arrangement and the vocals, lead and backing, but there's a warmth here, an almost heroic selflessness. That's too fair to be an overstatement; it's tempered by both trad rock arrogance and by so many attempts on this record at the same thing that can't get there, because that's a kind of intense magic you can't just decide to perform.

Because sometimes meaning well is all we've got; enter Arcade Fire's most epic and strange piece to date (still), "(Antichrist Television Blues)." Another playfully misleading opening, as a rockbilly song suggestive only mildly of the later Woody Guthrie aspirations for grassroots personal protest, collapses quickly so that Win Butler can give us another list of things he doesn't want to do. This time it's working in a building downtown -- it seems affected, because he's playing a role of a brimstone bile-spewing evangelist parading his young daughter around on stage. It's manipulative and rambling, but its most remarkable out-of-time moment comes when Butler begins pleading for a child, and it transcends the context in an unexpected way that points forward to a sincere illustration of the same desire in "The Suburbs" three years later.

I could do without such arm's-length character studies. That kind of melodrama, though, is perpetual on the record and frequently works marvelously. "Ocean of Noise" would be like Luna with an agena, just a subtle and rhythmic piece of atmosphere, if not for the deep piano chords that seem to stir the bones around. And "The Well and the Lighthouse" would be sprightly (if a little strained) radio punk without this band's sense of urgency, Butler drawing the battle lines in his good-and-evil parables like he and the band are remaking I Am a Fugitive from a Chain Gang in a building that's consumed with flames. It's completely silly in a way that "Intervention" is not, but it extends the spell that song cast somehow.

Escaping the clear marks of Bush-era anxiety, this music is all electricity and tension and fun. The opening seconds of "Keep the Car Running" sound like a hybrid of a Chrysler ad and a nighttime sulk session backgrounded by New Order, and what comes after is like opening the window and leaping off into the night air; the delicately pretty insistence sounds like the way music sounded to you as a teenager, whipping around corners and avoiding capture. The reprise of early track "No Cars Go" is another adolescent celebration, a further illustration of that strange indie-level consensus whereby in this microcosm we're all at a U2 show except we have our own people and our music but we chant along with macho disco songs too. It has no more content and form than any arena rock track, whether the arena is filled with Springsteen fans or Juggalos, but that's the charm and the point. It's a matter of solidarity, if you can forgive that awkward brass.

Through all these strange alleyways and flawed experiments with their sound, Arcade Fire mostly discover their pop spirit -- and how well it can capture the mood of the times. That's accomplished best in the extrapolated S&M metaphor "My Body Is a Cage" about an impossibility of expression familiar to all teenagers and former teenagers, a macabre, sexual and multilayered championship and rallying cry for the nearly unaccompanied (most of the way) Butler, evoking Prince and Trent Reznor singing in a gospel choir. It's impressively assured and as teasingly ambitious a song as the band has put down to date.

But the most telling ideological score is "Windowsill," along with "Intervention" the moment on Neon Bible when it's virtually impossible not to be moved. The band spends much time elsewhere in often vain search for the groove and the glory, and here it's all so natural because the sentiment is so simple but so titanic, as succinct as "Don't Worry Baby" and as biting as "You Haven't Done Nothing." With persistent, percussive pounding and a mounting sense of Spectorian drama, Butler offers another don't-wanna litany. I don't want to live in my father's house no more. I don't want to live with my father's debt, you can't forgive what you can't forget. (No matter what you say, there's some debts you'll never pay.) I don't want to fight in the holy war, I don't want the salesman knocking at my door, I don't want to live in America no more. Agree with its thrust or not, but it's the sort of juggernaut of a moment you can't dismiss easily. Many people said it in that decade, many didn't mean it (this band didn't, being Canadian), but it was somehow never so pressing and powerful, and never such a cause for unexpected and explosive applause. And all the while, the music bangs and clatters and pulses along like nothing any more important than anything else has been said.